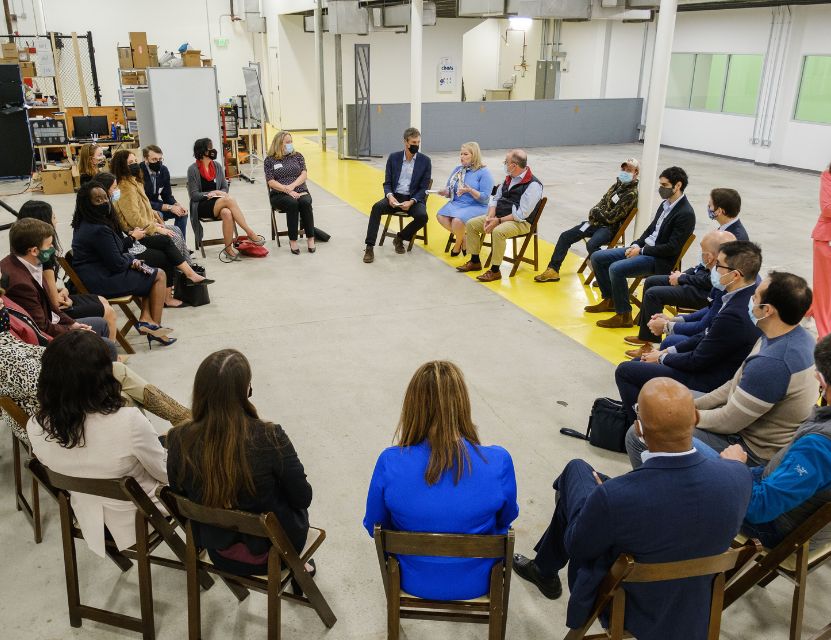 I'll never forget the moment I got the call from my friend, Jennifer Hohman.  Jennifer and I have known each other for years.  She called me and squealed with a bit of excitement.  "You have to see this movie," she said.

I'm not always convinced about watching movies about energy.

They range from complete false theatrics to sometimes getting it near right.  I wasn't convinced but because I care about this subject deeply, what would be another 90 minutes of my life on a weekend to take a look, I thought to myself?

So I fired up the tube and watched Living in the Future's Past, a documentary that Jeff Bridges did with Susan Kucera.  And then I watched it again. Those 90 minutes really gripped me.  Jeff, most well known as the "Dude" and an accomplished actor, singer, and songwriter, and probably the most loved one at that, really created a beautiful narrative about how we got where we are around climate change.  He and Susan took the opportunity to talk about the need to work together, everyone, to solve this challenge.  However, he did something that was even more powerful and asked a big question to the viewer.

What kind of future do you want to see?

I immediately began to research my own carbon emissions and what I discovered shocked me.  Despite my 2900 square foot home which I thought was somewhat efficient and "small", I, alone emit two times the national average.  One year of electric utilities equaled two international travel trips.  When I thought about how many times I've been abroad for my work, the numbers got crunching in my head.  It made me think hard about how much I've also wasted.  You can calculate your own here.

Society has become addicted to petroleum.

There's nothing wrong with wanting to prosper.  Prosperity is what's moved generations forward.  But we consume too much and fossil fuels are warming the planet.  And we, (the consumer) are a big part of this.  We're also addicted to phones and devices, despite the tech industry stealing and profiting from our data.  You don't hear the outcries of how horrific tech is, although all of those things are made possible through the use of petroleum products.

I'm not sure why the world thinks anyone would want to cause harm to themselves or their families. We all want a future for our kids.  I've been fortunate because the oil and gas industry has given me a prosperous career and afforded me many opportunities to do good in this world.  But I'm also keenly aware of how pissed off mother nature is having lost my home to Hurricane Harvey, and having watched many others far less fortunate not ever return to any sense of normalcy.

We simply must stop the finger-pointing and senseless debates and get on with developing next-generation technologies to decarbonize.  Governments need to work with industry to balance a well-managed transition.  All energy matters and we won't break through to new technologies stuck in the mire of the debate.  If we are going to spend our emotional energy on anything, it should be on the new future for the next generation.

What do a Hollywood actor and the oil industry have in common? More than you would think.

A few months ago, another friend Rebecca Ponton asked me to make an introduction to Jeff Bridges.  I was so excited about the movie in 2019 I contacted Jeff's team and we've done some work together, having Jeff appear at our Energy 2.0 event in 2020 just as the pandemic was unfolding, and later I and other industry leaders participated in his second documentary, Hot Money.

Rebecca wanted to interview the Dude and some of the supporting cast members for a triple issue out recently.  Check out the interviews in Energies (with Jeff and Susan), Oilman Magazine (Retired General Wesley Clark and his son, Wes Jr.), and Oilwoman, (with my daughter and I).  Jeff says we're all in this together, and I cannot agree more.

The oil and gas industry isn't going away, it's changing for the better

As a mom, wife, business owner, Houstonian, and global citizen, I care about clean energy.  And while the oil and gas industry will never be accepted the way we'd want it to be, I'm proud to declare that it's changing.  It's been getting cleaner and gaining strides for decades, and we are starting to see some movement on diversity.  While we cannot ever be satisfied, it needs bright minds and motivated leaders to take it into the next era.  It needs entrepreneurs and intrapreneurs to push the boundaries of what's possible, forward.  It's not going away, but it is changing for the better.

We need more talent now than ever to tackle the four-part challenge of energy security, reliability, affordability, and sustainability.  Now is not the time to turn our backs on Energy 1.0, but rather build Energy 2.0 to be an ecosystem of technologies that are fit for purpose for our needs.  We should also work together across all forms of energy to drive a workforce and industry that attracts the people we need to lead us to a NetZero future.

It's an exciting time to be a part of the energy industry. We all want clean, secure, reliable, affordable, and sustainable energy and we'll achieve it when we work together.