What do you think of this image? 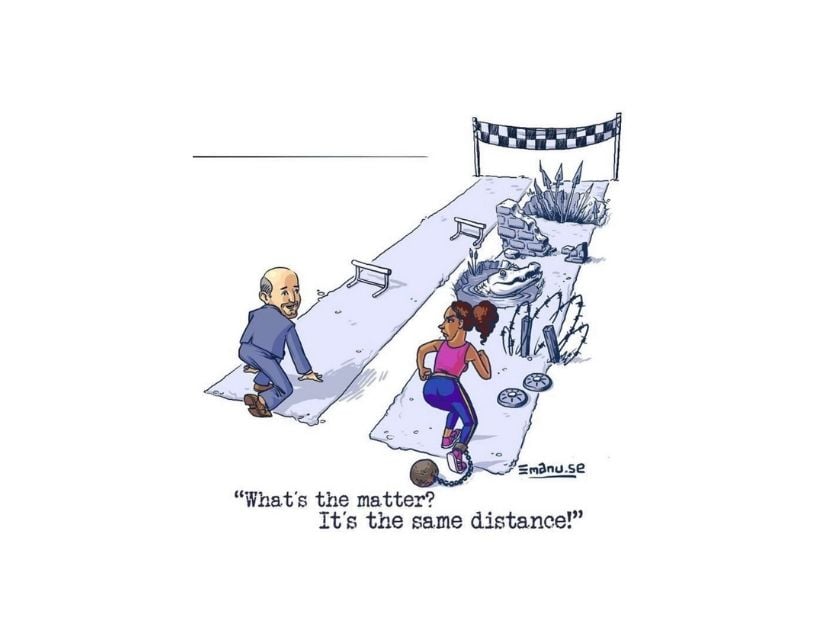 I shared an image on LinkedIn I recently received. It shows a Black woman and a white man at the start of a race. But she has a ball and chain attached to her leg and major obstacles ahead in her path, while he faces just two hurdles. The caption reads:

I posted it in hopes of provoking thought and respectful conversation.

“The road isn’t paved the same for everyone,” I wrote. “An ally is someone who jumps on the bumpy track and helps to remove obstacles.” (The image is attributed to “manu.se,” which is apparently an artist named Manuel Pereyra. My team has messaged him to confirm.)

It spoke to me in part due to a report from McKinsey and Lean In that showed the particularly difficult challenges Black women all too often face at work. As I wrote in MIT Sloan Management Review, there's an allyship gap. Many people believe they are acting as allies at work, when in reality those in need of their help say otherwise.

The vast majority of responses on LinkedIn were very positive.

At least a couple of people were upset by the picture.

Cord Johnson said it was “designed to invoke anger at those who are deemed to have ‘privilege’ by portraying them as condescending jerks who lack empathy and to cause anyone who possesses this ‘privilege’ to feel some sort of guilt about it and take on some sort of debt to those who don't have it.”

I don’t see it like that. I see it as a reminder for those to have an easier path to help others. Also, having run marathons -- with a goal of completing, not winning -- the image made me think of people who struggle along the way. They may not have physical obstacles we can see, but they’re trying hard and sometimes just need encouragement and a person to run alongside them. An ally.

To be true allies, we must always be ready to learn.

I’m grateful to people like Paula Glover and Shantera Chatman who have shared their insights and guidance on allyship on our platform. I’m committed to using this platform to help all of us come together and lift each other up across the entire energy sector. That includes recognizing the tremendous work we must do to create a level playing field, including for people of color.

As the platform accelerating connections, careers, and skills for an equitable energy transition, ALLY is here as a resource for everyone in the industry. Share your stories, offer or seek advice, network, find new job opportunities, discover fantastic candidates, and more. Join us to build connections, hear new perspectives -- and be a part of taking concrete action.